For some time now I have had the sense that the concept of Carbon Tax is becoming a more acceptable dining room conversation topic, so yesterday I decided to poke around the web to see what I could see. While I didn’t find direct proof that there’s more than last year, I  certainly found no shortage of interesting, provocative commentary and I am now comfortable talking about it with anyone.

It seems obvious to me that if we want to discourage the use of fossil fuels we should increase the price. The generic name for this idea is a Price on Carbon. This includes Carbon Tax and Cap & Trade, but what do these mean? Many commentators justify the tax saying that it addresses the cost of the damage done by burning carbon.

The simplest description of a Carbon Tax that I found was by James Hansen:  1) A fee is charged at the point of origin or point of import on greenhouse gas emitting energy (oil, gas and coal).  2) The fee is progressive (increases gradually) over time.  3) The fee is returned to the public. Read a description of the Canadian version, what it is, why it will work, and why the Climate Lobby prefers to call it Fee and Dividend.

Isn’t Cap & Trade just as good? No. The consensus is that it’s more complicated, subject to abuse by powerful forces, and takes longer to put in place. One advantage often mentioned is that it’s more politically correct to avoid the word Tax. Start your own reading in The Guardian or The New Yorker,

Does a Carbon Tax work? Well, Macleans magazine and The Guardian both report that it’s working in BC, and that the BC economy is doing just fine. The Globe and Mail reports that BC intends to pressure other jurisdictions to follow their lead. The New York Times comments on the Myriad Benefits of a Carbon Tax including a discussion of why it’s better than Cap and Trade.

Most Canadian politicians still seem reluctant to mention climate change at all after what happened to Stéphane Dion’s Green Shift only five short years ago, and the Canadian press continues to be pretty quiet, but things appear different in the USA. A recent Huffington Post article highlights that the issue is getting hot in Washington. In the same article, Al Gore is quoted as saying “We should tax what we burn, not what we earn.” Yesterday’s New York Times has an article titled A Carbon Tax That Americans Could Live With in which they reference a carbon tax bill which they imagine bi-partisan support that might result in its passing.

If you do your own research on this topic you will find lots of opinions that are not so flattering towards a Carbon Tax. My sense is that they are mostly promoted by the same people who deny that Climate Change is real and is caused by humans, but you should read them and judge for yourself. I’m just not going to point them out to you. 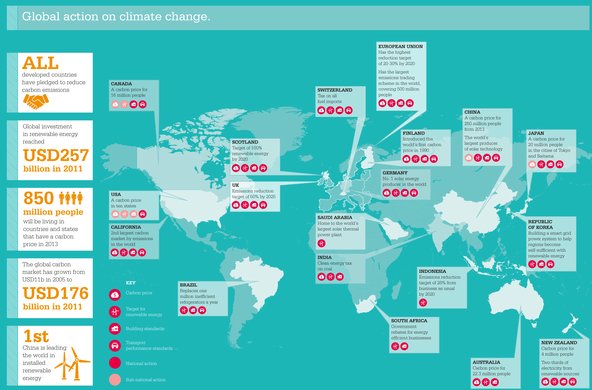 I’ll leave you with this sign of hope. This International Herald Tribune report  on Norway nearly doubling their Carbon Tax includes a graphic that shows actions from around the world to combat climate change. Included among many initiatives is the impressive claim that in 2013, 850 million people will be living in countries and states that have a price on carbon in one form or another. Click on the map to see the full sized image.

Update – Jan26, 2014. While checking the broken link associated with the good news map, I found the referenced web sites have disappeared. The International Herald Tribune has been re-branded as the International New York Times, and the Australian Climate Commission was abolished by the newly elected government, but has reappeared as the independently funded Climate Council. So much for permanent links on the web.