The big issue at the Guelph Climate Change Forum was Enbridge’s application to the National Energy Board to reverse a section of its Line 9 pipeline between Montreal with Sarnia.  This line traverses many watersheds that flow into Lake Ontario.  A rupture such as happened with Enbridge’s line at Kalamazoo, Michigan, would have a serious impact on the water supply for numerous Ontario towns. Environmental groups have expressed their opposition to this reversal, focusing on the risks of converting this 38 year old pipeline into the preferred means of transport of dilbit (diluted bitumen) to new markets.

Candidates for three of the four major Ontario Political parties (Guelph riding) set out the position of their party on this issue.

The Honourable Liz Sandals (Liberal) pointed out that Ontario had requested the Energy Board to impose two major conditions that would:

James Taylor (NDP) called for robust environmental assessments and community consultation on the proposed reversal- not just a review of safety risks. He considered these assessments and consultations necessary as the 2012 Federal Government budget bill had limited the powers of the National Energy Board to protect the public interest.

Mike Schreiner (Green Party) was against the proposed use of this pipeline.  Ontario did not benefit in any way by the reversal of Line 9  so  the Energy Board should refuse the application.

Besides the risks of using a 38 year-old pipeline for dilbit, Schreiner noted that an accidental rupture could well be of the same magnitude as the spill from Enbridge’s Kalamazoo pipeline. That rupture caused the greatest spill ever of carbon pollutants into fresh water in America. Schreiner also observed that Line 9 would greatly facilitate exploitation of tar sands oil, a circumstance that would dangerously increase world GHG emissions.

Subsequent to this Forum Ontario Liberal Premier Kathleen Wynne, speaking in Calgary, declared her support for west-to-east oil pipelines  as this would strengthen national political consensus and re-set the relationship between Canada’s two economic powerhouses.

Wynne said that Ontario values its relationship with Alberta and benefits greatly from oil sands development. She did make her support subject to conditions:  any project must ensure protection of the environment and inclusion of First Nations. One can understand why Alberta and the fossil fuel industry welcomed Wynne’s endorsement. 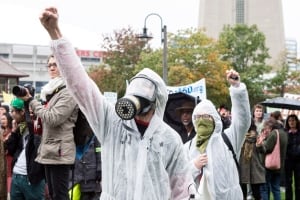 Unfortunately the fossil fuel lobby has great influence with our politicians – leaving public demonstrations as the only way in which to express public objection. The political opposition to dilbit pipelines is now largely confined to environmental groups.